A Six Year Old's Take on daVinci's The Last Supper

I am totally in love with all the Holy Week action going on over at Lacy's {Catholic Icing} and got super excited to see the activity she prepared {and shared} for Holy Thursday.  She did this based on Leonardo da Vinci's the Last Supper:

See?  I was so excited to get it going with my six and four year olds but never did I think I'd get the reaction I got.  Before I tell you what happened, I should tell you two things:  First, about my six year old.  Our little Jojo sees the world very different than most kids his age, very different than his own Mama, actually.  He sees things VERY black and white and there are no in betweens.  I tell Todd that he'd make for a very good priest because of this natural inclination of his.  Second, when it comes to meal time, we stress eating as a family A LOT and because of my beloved's job situation in the past three years, that means almost all three meals {he has been laid off five times}.  At the table, everyone has a place where they sit, not really assigned..it kinda just happened!  For obvious reasons, Dada's spot is at the head of the table.

So as I {very excitedly} explained who da Vinci was, and his painting, my six year old's first reaction was, "mom, there is something wrong with that painting?"  Me, "there is?  What would that be?"  "Why on Earth would they sit like that, that's not the way a family sits and Jesus and his Apostles were like family!"  {his face says it all, he is mad, frustrated, and confused!}.  "Son, this is a very famous painting and it is the artist's interpretation of the Last Supper," I immediately replied to him.  "Mom, Jesus was their leader, like Dada is the head of our house, and he sits at the head of the table so Jesus would have to sit there and the Apostles on the sides!" he clamored.

Okay maybe the kid had a point {he does very often, btw}...something I never really thought about, I mean I've seen the painting hundreds of times and heck it is Leonardo daVinci, why would I question it?  But my lovely six year old did, he challenged the great artist's interpretation of the Last Supper!

So what did I do, like a good homeschool educator, I went with it!  "So Jojo, what should we do because here are the directions from Mrs. Lacy and this is how she explained we should do it so that we have a nice piece to decorate the mantle for tomorrow?"  "Mom, I have a plan!" he stated...and he did.  Here is my six year old's version of the Last Supper's seating arrangement, lol:


here he is proudly looking at his handy work: 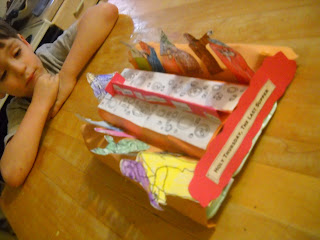 So what's different from Mama Lacy?  Well he placed Jesus at the head of the table {far left} and the Apostles on the sides {six on each side}.  He also gave them place settings with their names.  I was glad he did this because at one point when they were cutting them out, Katie-Anne asked me who that one was and I had to look back at Lacy's original.  So with name settings, there were no problems identifying each one.  I did try to get him to place them in the "right" daVinci order but he went his own route on this as well.  He was very specific in wanting Peter next to Judas!  He said that Peter must have known that Judas was a traitor an needed to sit next to him so that, "he could keep an eye on him!"  In addition, he wanted a title to the scene.   I made a label that says, "Holy Thursday, The Last Supper" and we placed it at the far end of the table opposite Jesus.  Here are more pictures: 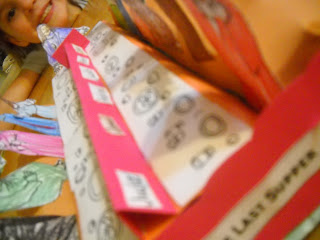 Notice they chose to not color the food at the table {and that they wanted a table clothe}, they are going to cook {color} the food tomorrow!  ;) 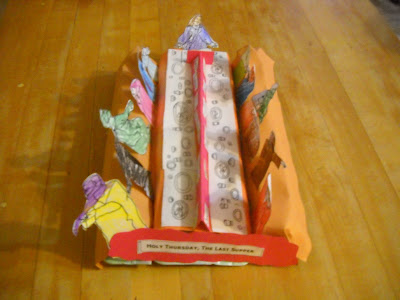 Katie-Anne wants her picture in too ;) 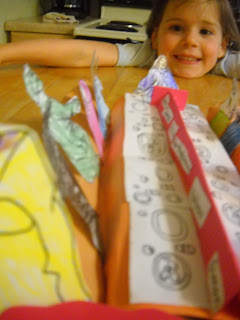 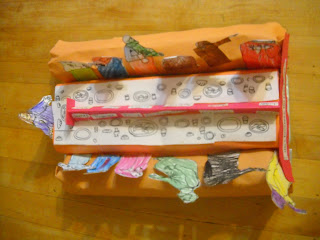 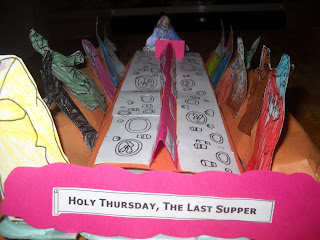 So I hope that Mama Lacy over at the lovely CatholicIcing, doesn't mind that Jojo changed her plan up ;)  Thanks for sharing with us, Lacy!

Tomorrow, washing of the feet...guess who will be doing it?  Yup, Jojo...well at least at our house!  ;)