Did you know today, the On the Wednesday of Holy Week, is called "Spy Wednesday"?  I had never heard of it until I saw friends on Facebook posting it here and there and everywhere.  So I started looking into it...so here's the gist of it. It is called Spy Wednesday because this is the day Judas conspired with the Temple leadership to hand Jesus over tot he Sanhedrin. He would accomplish his task the evening of the next day, but today he makes arrangements to hand Jesus over and is paid. Because Judas is thought to be sneaky, his actions conjured up the image of a spy. This is how the Gospel of Matthew, Chapter 26: 14-25 recounts the events of today:


One of the Twelve, who was called Judas Iscariot, went to the chief priests and said, "What are you willing to give me if I hand him over to you?"  They paid him thirty pieces of silver, and from that time on he looked for an opportunity to hand him over.

On the first day of the Feast of Unleavened Bread, the disciples approached Jesus and said, "Where do you want us to prepare for you to eat the Passover?" He said, "Go into the city to a certain man and tell him, 'The teacher says, AMy appointed time draws near; in your house I shall celebrate the Passover with my disciples."'" The disciples then did as Jesus had ordered,
and prepared the Passover.

When it was evening, he reclined at table with the Twelve.  And while they were eating, he said,
"Amen, I say to you, one of you will betray me." Deeply distressed at this, they began to say to him one after another, "Surely it is not I, Lord?"  He said in reply, "He who has dipped his hand into the dish with me is the one who will betray me.  The Son of Man indeed goes, as it is written of him, but woe to that man by whom the Son of Man is betrayed.  It would be better for that man if he had never been born."

Then Judas, his betrayer, said in reply, "Surely it is not I, Rabbi?"
He answered, "You have said so."

So after that reading and talking some with the kids, we decided to pick four words that had meaning for this day, they selected:  flowers, blushing, betrayal, and shame.  We made this into a step-by-step art lesson using a picture of the tree Judas hung himself from, now known as the Judas Tree (or it's scientific name: )  We used our Draw-Write-Now book to start the tree off and then they each added something.  The details was either my 7 year old's idea (like seeing Calvary from afar) or making gray clouds because "God was probably really sad at Judas," as my five year old daughter suggested.  We used colored pencils, crayons, and markers to make it a mixed media project.  Here are their masterpieces:

A Closer look at them: 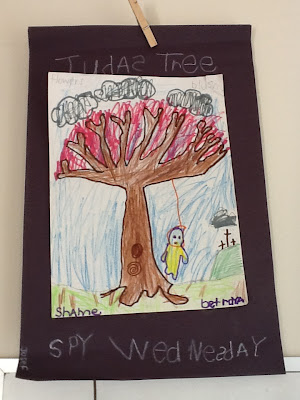 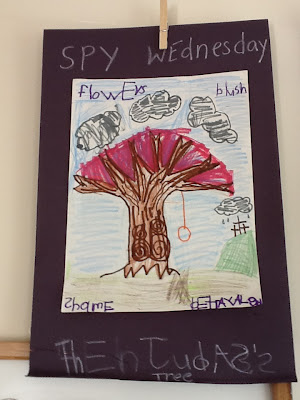 They did these with just a little guidance from me, not bad for ages seven and five huh? :D
While I won't be posting the remainder of the week, here is my post from last year's Holy Thursday,
A Six Year Old's Take on daVinci's The Last Supper. 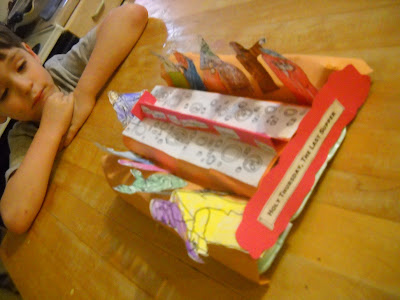 And our Holy Week Journey from last year with a FREE printable!  :) 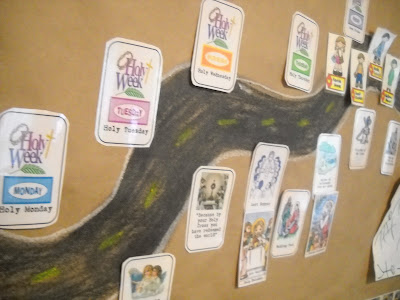 Have a blessed remainder of the week friends!