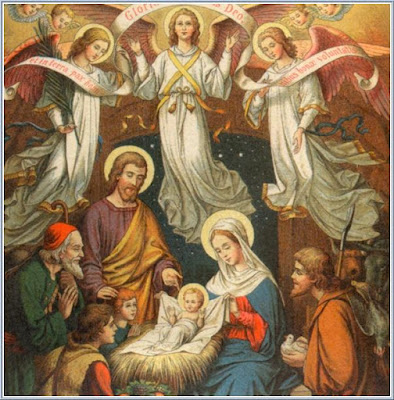 And this will be a sign for you: you will find an infant wrapped in swaddling clothes and lying in a manger.”
And suddenly there was a multitude of the heavenly host with the angel, praising God and saying:
“Glory to God in the highest and on earth peace to those on whom his favor rests.”"
Luke 2:1-14 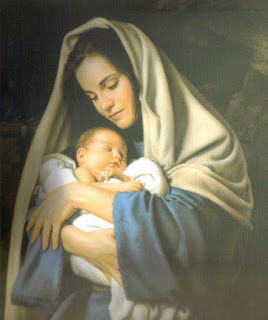 CHRIST'S BIRTH
"I saw the radiance round the Blessed Virgin ever growing greater. The light of the lamps which Joseph had lit was no longer visible. The Blessed Virgin knelt on her rug in an ample ungirt robe spread out round her, her face turned towards the east.

At midnight she was rapt in an ecstasy of prayer. I saw her lifted from the earth, so that I saw the ground beneath her. Her hands were crossed on her breast. The radiance about her increased; everything, even things without life, were in a joyful inner motion, the stones of the roof, of the walls, and of the floor of the cave became as it were alive in the light. Then I no longer saw the roof of the cave; a pathway of light opened above Mary, rising with ever-increasing glory towards the height of heaven.
In this pathway of light there was a wonderful movement of glories interpenetrating each other, and, as they approached, appearing more clearly in the form of choirs of heavenly spirits. Meanwhile the Blessed Virgin, borne up in ecstasy, was now gazing downwards, adoring her God, whose Mother she had become and who lay on the earth before her in the form of a helpless newborn child. [100]
I saw our Redeemer as a tiny child, shining with a light that overpowered all the surrounding radiance, and lying on the carpet at the Blessed Virgin's knees. It seemed to me as if He were at first quite small and then grew before my eyes. But the movement of the intense radiance was such that I cannot say for certain how I saw it.
The Blessed Virgin remained for some time rapt in ecstasy. I saw her laying a cloth over the Child, but at first she did not touch Him or take Him up. After some time I saw the Child Jesus move and heard Him cry. Then Mary seemed to come to herself, and she took the Child up from the carpet, wrapping Him in the cloth which covered Him, and held Him in her arms to her breast. She sat there enveloping herself and the Child completely in her veil, and I think Mary suckled the Redeemer. I saw angels round her in human forms, lying on their faces and adoring the Child.
It might have been an hour after His Birth when Mary called St. Joseph, who was still lying in prayer. When he came near, he threw himself down on his face in devout joy and humility. It was only when Mary begged him to take to his heart, in joy and thankfulness, the holy present of the Most High God, that he stood up, took the Child Jesus in his arms, and praised God with tears of joy.
The Blessed Virgin then wrapped the Child Jesus in swaddling-bands. I cannot now remember how these bands were wound round; I only know that the Child was wrapped to His armpits first in red and then white bands, and that His head and shoulders were wrapped in another little cloth. Mary had only four sets of swaddling-bands with her. Then I saw Mary and Joseph sitting side by side on the bare earth with their feet under them. They did not speak, and seemed both to be sunk in meditation. On the carpet before Mary lay the newborn Jesus in swaddling clothes, a little Child, beautiful and radiant as lightning. Ah, I thought, this place enshrines the salvation of the whole world, and no one guesses it. Then they laid the Child in the manger, which was filled with rushes and delicate plants and covered with a cloth hanging over the sides. It stood above the stone trough lying on the ground, to the right of the entrance, where the cave makes a big curve towards the south. This part of the cave was at a lower level than the place where Our Lord was born: the floor slanted downwards in a step-like formation. After laying the Child in the crib, they both stood beside Him giving praise to God with tears of joy. Joseph then arranged the Blessed Virgin's resting-place and her seat beside the Crib.  Both before and after the Birth of Jesus, I saw her dressed in white and veiled. I saw her there in the first days after the Nativity, sitting, kneeling, standing, and sleeping on her side, wrapped up but in no way ill or exhausted. When people came to see her, she wrapped herself up more closely and sat upright on her lying-in coverlet."

You can read more of Anna Catherine's writings.  OR if you would like to purchase it for your home, you can visit TAN Books' Website.