War is an Awful Thing: Honor, Justice, and Peace 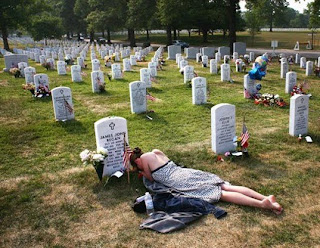 I saw this picture posted today on Facebook, and I searched for the name on the marker so I knew who this man was. James John Regan gave his life for God and country in 2007. I believe the girl lying prostrate at his grave was his fiancee. I hope she found some peace and perhaps a man that could be with her understanding the love she had for John. From his obituary:


"James J. Regan, in his brief life, did not choose the predictable, cushy jobs his background and ability afforded him. Regan, at 26, last week gave his life for his country, a United States Army Ranger killed in Northern Iraq, having already served four tours of duty - two in Afghanistan and two in Iraq. A fellow Army Ranger recalled, "James Regan was the guy you want next to you at all times." 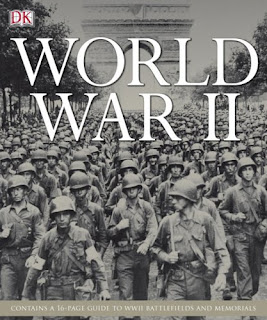 As for my life, I never knew my mother's father. Ennis Ray Hite died in early 1947, but he really died in World War II. He was injured while under MacArthur, and the plate put in his skull was ill fitting. It shifted one time too many, and caused him to black out while driving, causing a fatal accident. People who knew him said the war, and his injury, changed him. It usually does, even if you come home "uninjured."

My wife's father suffered death in war as well, though he died a tortured death at the hands of Communists. I wonder sometimes if we would have met had he not died, given Erika grew up in Nicaragua, but she didn't stay there, and thus we ultimately ended up together, five children later. :-)

I pray for either the conversion, or the death of every communist in the world, to those to murder and oppress and rape their way to power, and pray for those that war in Islam in the supposed name of God, but more I pray for the souls of the men and women who fought, suffered, and died for our country, and in all countries throughout history in the search for justice, truth, and peace.

War is an awful thing. Sometimes though, it is a necessary thing. Pray for peace, but pray also for strength and determination when war comes to your door.

Please pray for the soul of my grandfather, Ennis Hite, my other grandfather, who also served in World War II, Emory Drain, and that of my wife's Father, Pablo Emilio Salazar, "El Commandante Bravo." May their souls rest in peace and the mercy of Almighty God. And please spend some time, and perhaps a Rosary, praying for the souls of our war dead, and all who die in the service of country with honor, justice, and peace.

Remember those that fought for the freedom we have today! 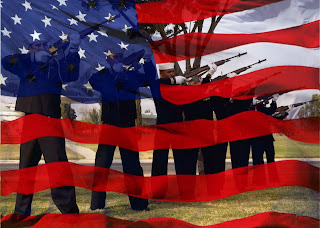